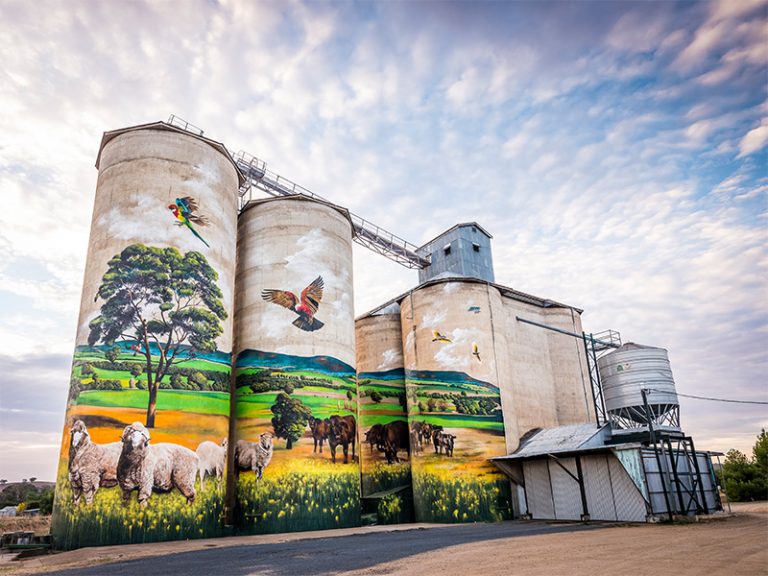 The silos were built in 1925, with later additions to the northern end of the silos in 1961 and a bulkhead built in 1968 bought the capacity of the facility to over 23, 700 tones. Grenfell Commodities purchased the large storage facility, including the silos in 2015 from Graincorp. The silos had been dormant since 2007, though resumed operation once procured and continue to operate as a functional worksite.

The mural was completed by Heesco and is a compilation of images representing the contemporary farming industry and landscape of the Weddin Shire. The foreground features sheep, cattle, and native birds set in a landscape adorned by the Weddin Mountains National Park. The skyscape incorporates the natural sepia colour of the silo topped with light cloud coverage. The artwork is an adaption of photographs taken by locally renowned photographer Denise Yates of Five Hours West. Images of the birds were supplied by local ornithophile, Jenn Graham.

Known by the artist name Heesco®, Khosnaran Khurelbaatar is a Mongolian-Australian muralist and fine artist. Born in 1979 in Ulaanbaatar, Mongolia, Heesco moved to Australia in 1999. He graduated Sydney College of the Arts with a Bachelor of Visual Arts degree in 2005. Heesco relocated to Melbourne in 2010, where he has established himself as one of the leading contemporary mural artists. Follow artist Heesco at here.

The mural is best viewed from the corner of South Street and West Street.

There are hospitality and retail businesses open 7 days a week in Grenfell. And there are plenty of other attractions to see and explore while you are here.

The nearest public toilets are at the Railway Station 400m to the north.